Report about the EAFT Summit 2021

Below is a short account of the many themes discussed at the EAFT Summit 2021, which was organised by the Gaois research group at Fiontar & Scoil na Gaeilge and the School of Applied Language and Intercultural Studies (SALIS), Dublin City University, on the 25-26th of November 2021. The event was originally planned to be held in Dublin in 2020, but plans had to be adjusted in light of the COVID-19 pandemic.

The theme was ‘Terminology in Challenging Circumstances’; a theme chosen in 2019 which proved to be ironically perfect for 2021.  You can find all of the talks on the Gaois Youtube channel. The online approach to the conference worked fairly well in the end, allowing speakers to attend from as far afield as the USA, Ukraine, and Georgia.

As the Summit was beginning, we asked those in attendance what they felt was the most pressing issue in the field of terminology. Funding, staffing issues, and language status were firmly among the most common responses. 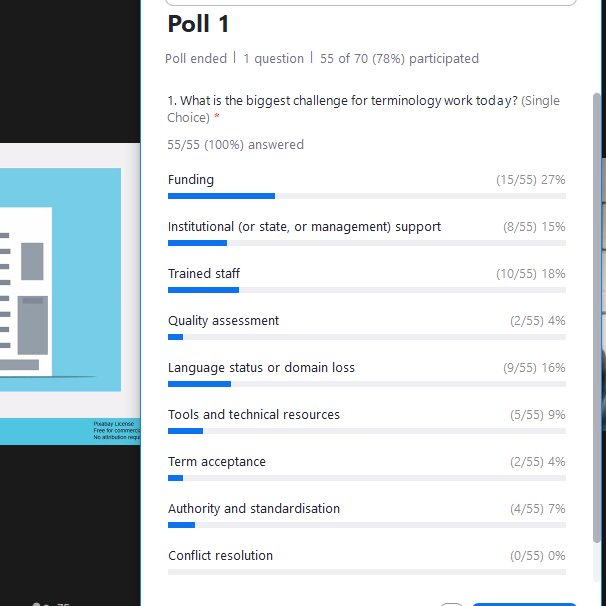 The first theme was that of crisis terminology, and two speakers discussed the link between migration, communication, and terminology. Jessica Mariani (Communications Strategist for the European Commission) raised a question about the meaning of the terms ‘refugee’, ‘asylum seeker’, and ‘immigrant’ - as well as the implications of those terms for the people affected by the debate. Veronica Crosbie (SALIS, Dublin City University) followed up with another issue: when people are forced to flee their home country, she said, there is a danger that they have not only lost both their homes and their way of life but also their identity, given that the labels ‘refugee’, and ‘asylum seeker’ bring with them the status of ‘other’ in the eyes of state officials, local agents, and the media. Sharon O’Brien and Patrick Cadwell (SALIS, Dublin City University) discussed the role of translators in crisis situations and the need for precise terminology for both translators and for devastated populations. Finally, Lotte Weilgaard Christensen (University of Southern Denmark) and Bodil Nistrup Madsen (Copenhagen Business School) described the way in which the COVID-19 pandemic gave rise to many terms that are neither wholly understood by the public nor clearly defined.  The result of this has been the rapid influx into the public consciousness, and subsequent obsolescence, of fast-changing terminology both on a national and international scale. They explained the manner by which Denmark addressed this issue.

After a poster session (short videos about the topics can be viewed here), a lunch break, and a general assembly, the Summit carried on with the second theme: terminology in relation to minority and endangered languages, during which Sue Ellen Wright spoke on terminology guidelines for native languages. The project Zero to Digital, headed by Translation Commons, is currently developing methodology and teaching material in order to support the documentation of native languages. The aim of this project is to aid in the complete digitisation of languages whose speakers wish them to be preserved, for example Cherokee, Fulfulde (of the Sahel) and Chakma (of Bangladesh). We also heard from Emil Molander (LYS Publishing and Umeå University) on the subject of terminology textbooks for foreign-born professionals in Sweden. Sergio Portelli (Malta University) gave a talk entitled ‘Why bother? The challenges of terminology work in Maltese’. Malta is a bilingual state officially, but whose written communication is largely through English. Maltese was declared a working language of the European Union in 2004, creating the need for a huge amount of terminology work to facilitate the translation of EU documents. However, the necessary infrastructure simply wasn’t there. Doubt remains as to the value of this work among those who would prefer to simply keep using English, due to established practices, an already multilingual workforce, time and financial constraints, health and safety, international affiliation, and standardisation.

On Friday, after a welcome video from the University President Daire Keogh, we began the day with the third theme: the challenges associated with group terminology work. COVID-19 came up again as Rute Costa (NOVA CLUNL, Portugal) spoke about the factual reality of a post-COVID-19 recovery. Begoña Arrate, UZEI (Basque Centre for Terminology and Lexicography) discussed ways of fostering agreement on terminology among experts of various fields, in much the same way that the Terminology Committee has done for Irish. Anca-Marina Velicu (Bucharest University) referenced the Terminology Association of Romania, and the crises it currently faces - the terminology database has seen no updates since 1999, and the association has only two remaining members. Victoria Ivashchenko (Borys Grinchenko Kyiv University) spoke on the state of terminology in Ukraine, and finally Marta Grané Franch (TERMCAT, Catalonia) described the way in which TERMCAT, a model organisation in many ways, put together a collection of terminology relating to cybersecurity.

Friday afternoon was focused on terminology on a budget. Sarah Cogan (Meta) spoke about the way in which Meta (or Facebook) manages the terminology used in localisation. Barbara Karsch (BIK Terminology) then gave a veteran’s perspective, as she put it, of the landscape of the terminology field, and the lack of understanding of the importance of such work. Lia Karosanizde (Vukol Beridze Association of Terminology of Georgia) discussed the issue of terminology with regard to Georgian. As she put it, any country unable to cross the digital divide will be forced to use another language to communicate with the rest of the world, which could, for Georgian, lead to a disastrous loss in knowledge of one of the oldest, richest, and most multifaceted languages in the world. Rodolfo Maslias and Angelica Marino (Terminology Coordination Unit of the European Parliament) shone a light on the European Parliament’s YourTerm project aimed at bringing university students into the fold of terminology. Finally, our own Brian Ó Raghallaigh agus Michal Boleslav Měchura spoke about Terminologue and open-source terminology solutions. The project garnered much interest from other speakers during the meeting, especially as a teaching resource.

What emerged across the two days, particularly during the final discussion, was a general understanding among those present of the challenges currently facing terminology as a field: funding, of course, but also a lack of understanding around linguistic issues and as well as of the importance of terminology itself; and, for languages for which little terminological work has been done, a whole host of other challenges which must be addressed.

As a final word, I would like to acknowledge that organising an online event as large as this - with over 100 people in attendance and with simultaneous interpreting between French and English - was no small feat. Credit must be given to the EAFT Board, to SALIS, and to every member of the Gaois team for coming together to arrange such a meaningful and fascinating event. We eagerly await the next summit in 2023.